Red Hat Software has just unveiled version 4.1 of its highly touted rendition of the Linux operating system, and it’s a whole lot easier than it used to be.

The hardest part about Linux has always been the installation. Drivers are tough to find, documentation is scarce, and support is nonexistent. Red Hat wants to change that, and the company has hit a home run with this new version. Not only does this release come with more than twice as many drivers as its predecessor, but the once-painful act of setting up Linux is now as easy as installing Windows. 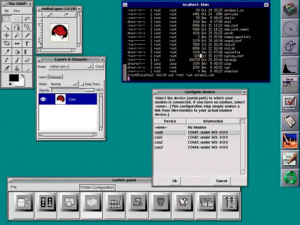 The installation program now scans for and automatically detects mice, sound cards (up to and including the SoundBlaster Awe64), video cards, and SCSI adapters. It even tests your monitor during detection to determine its maximum display properties and allow for optimal performance when running Linux.

The somewhat cryptic fdisk tool has now been replaced by a wizardlike utility called Disk Druid, which allows users to prepare their disk using an easy-to-understand graphical interface. Version 4.1 also includes a utility called Kickstart, which allows admins to store all system parameters to a floppy or network disk, then use those parameters to set up multiple, identical OS installs on any number of machines.

One of the most important issues Red Hat Software confronted was the difficulty of installing Linux as compared with other desktop OSs. Installing Linux 4.1 is almost as easy as installing Windows. Before you start, though, do a little planning. Deciding how to partition your hard disk, checking your hardware against the available compatibility lists, and knowing the technical specs for your video card and monitor are crucial steps. A little preparation will prevent a lot of problems later.

To start, boot your PC from a supplied floppy disk, which loads a bare-bones kernel and begins the installation program. You can boot directly from the CD-ROM if the computer’s CMOS allows it. You then need to partition and format your hard disk; this process is made much easier with Red Hat Software’s new Disk Druid utility. Linux then guides you through a series of menus to choose hardware support and software packages. In the final steps, you set up X Window, a GUI developed and maintained by the X Consortium at MIT.