FreeBSD is a 4.4BSD-Lite based operating system for the Intel architecture (x86) and DEC Alpha based systems. Ports to other architectures are also underway. 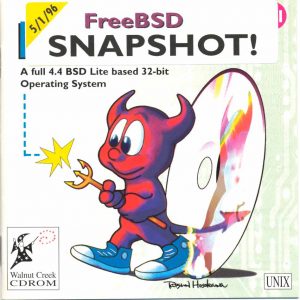 FreeBSD 1.0 is based on the 4.4BSD-Lite release from Computer Systems Research Group (CSRG) at the University of California at Berkeley, and carries on the distinguished tradition of BSD systems development.

This project had its genesis in the early part of 1993, partially as an outgrowth of the “Unofficial 386BSD Patch kit” by the patch kit’s last 3 coordinators. The fist distribution was FreeBSD 1.0, released in December of 1993. This was based on the 4.3BSD-Lite (“Net/2”) tape from U.C. Berkeley, with many components also provided by 386BSD and the Free Software foundation. It was a fairly reasonable success for a first offering, and we followed it with the highly successful FreeBSD 1.1 release in May of 1994.