Storm Linux 2000 is a version of the popular Linux operating system, which many consider the main competitor to Windows NT. Based on the robust Debian GNU/Linux distribution, Storm Linux offers a choice of office suites and graphical desktops, as well as a set of graphical tools for configuration and maintenance. The Standard Edition also features 30 days of telephone installation support, and 120 days of e-mail support: more than any other major version of Linux on the market today. 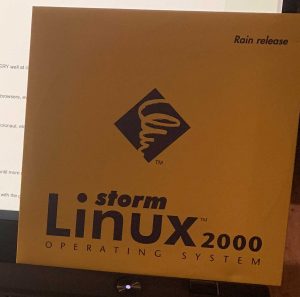 First released in December, 1999, Storm Linux 2000 Standard Edition available for US and Canada, Open Edition is freely redistributable, this edition is available for free download from the Stormix servers and mirrors.